I was looking for a reasonably priced short haul trip for myself and my son to take over the holiday break. DC called out to me.  Several of my favourite tv shows are set in DC ( Scandal, The Blacklist and Veep) and the constant shots of Washington exteriors got me thinking–wouldn’t it fun to see some of these iconic places in person?  So about a month before Trump was to be inaugurated,  we spent three days walking around downtown Washington DC. Looking back, it was a great time to go, the proverbial calm before the storm.

We landed in Washington in record time and took an Uber to the Embassy Suites Hotel. Everyone was taking Ubers–the cab stand was empty. So we got with the program and took Ubers for the next three days.  At the gift shop on the way up to our room–we noticed that there was still lots of Hillary stuff on sale for half price. The saleswoman explained that they had prepared for it to either way.   One month away from the inauguration and it was quiet enough to hear a pin drop. I bought a ” Make America Great Again” hat as a joke gift for my husband.

This hotel was perfect for me and my 16-year-old as there were two separate rooms and every day breakfast was complimentary.  There is also free wine and snacks in the evening.  We didn’t spend much time settling in as we had tickets to a unique event–the lighting of a giant Chanukah menorah on the White House lawn.

We headed on foot to the Ellipse and I found myself able to wear just a sweater even though it was December 25th.  Being a holiday it was very quiet walking there but we soon came upon a long lineup of people who were ready to scarf down latkes and watch some rabbis on a forklift kindle the lights that remind the Jews of long ago miracles. It was a special opportunity and I was grateful to have something so noteworthy to do with a bunch of other people who don’t celebrate Christmas.

The three days went by quickly.  We took it at a leisurely pace, so there is lots to come back and see.  One day we tried taking the subway to get to the Mall–the area where all of the statues, memorials, and museums are laid out one after the other.  We took our time and visited two of my favourite historical icons–Martin Luther King Jr and Franklin Delano Roosevelt.  It was awesome to see these tributes to great men in person. I also enjoyed taking my picture next to a statue of Eleanor Roosevelt.

Washington looks familiar because so many shows will flash the various sites in montages.  I tried to find the location where my favourite characters sit in Scandal. It was a lot of fun just walking around the pond and looking at the monuments from across the water. We then headed back to the museum area where there are enough free buildings to keep you busy for at least a month! But we only had a couple of days. To save money and time, we found a bus that only costs a dollar but goes in a constant loop around the mall and by the museums and attractions. 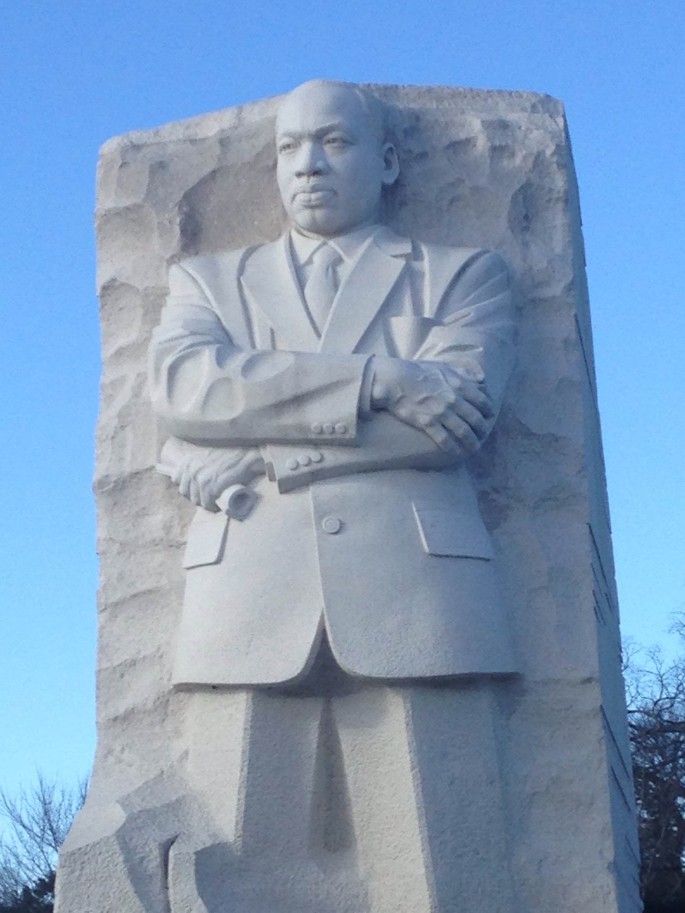 On this trip, I  had a number of interesting conversations, particularly with people who were trying to get into the brand new African American Museum. One lady was on a bus with us and told me she was on her way because her husband had been given tickets months ago. Myself, I had tried from 6 am online and now was coming down to try to get in from the standby line. It did not happen! But it was nice having the chance to talk to people who share my interest in African American history. We made up for this disappointment by having a delicious dinner at an upscale soul food restaurant. Fried chicken with mashed potatoes, gravy, and collard greens were some of the best southern soul food I’ve ever tasted.

I bought a keepsake–a copy of King’s famous I have a Dream speech.  Soon we were headed home with memories of mother-son bonding in the US capitol.